Rights groups have condemned the almost absolute exclusion of Rohingya from voting in November's election and their continued vilification as illegal interlopers.

"Myanmar has done nothing to address the root causes of discrimination and impunity that give rise to the ongoing risk of genocide against the Rohingya," said Global Justice Center legal director Grant Shubin.

The Rohingya crisis has left the international reputation of Myanmar and Suu Kyi in tatters.

The UN General Assembly last week voted overwhelmingly for a draft resolution expressing "grave concern" over serious rights violations against the Rohingya, a decision Myanmar blasted as "intrusive" and "illegitimate".

NEW YORK — The government of Myanmar today filed its second report to the International Court of Justice on compliance with the court’s order to protect Rohingya from genocide. The report will not be made public at this time.

“We welcome Myanmar’s second report, but merely meeting the court’s technical deadlines is not enough. Since the provisional measures order was issued, Myanmar has done nothing to address the root causes of discrimination and impunity that give rise to the ongoing risk of genocide against the Rohingya.

“In fact, the government has ramped up discrimination with this month’s election that disenfranchised Rohingya voters and blocked Rohingya candidates from running for office. Meaningful compliance with the order requires comprehensive legal reform to dismantle systemic discrimination against the Rohingya and to strip the military of its supremacy and autonomy.”

As we continue to respond to  the COVID-19 pandemic worldwide, civil society discuss various outcomes at this session of the Third Committee, despite additional challenges associated with the session being held mostly online.

We welcome the joint statement on reprisals led by the United Kingdom and joined by a cross-regional group of countries, calling on all States and the UN to prevent, respond to, and ensure accountability for cases of intimidation and reprisals against those who engage or seek to engage with the UN. We welcome in particular the increased number of States joining this year (75 compared to 71 last year).

One highlight of this session was a powerful joint statement on China by a cross-regional group of 39 Member States. This statement represents a strong public rebuke of the Chinese government’s widespread human rights violations in Xinjiang, Hong Kong, and Tibet, and is further proof that a growing number of governments are braving Beijing’s threats of retaliation and voicing alarm. The joint statement endorsed an appeal from 50 UN human rights experts for the creation of a UN mechanism for monitoring human rights in China. It also urged China to allow the UN High Commissioner for Human Rights unfettered access to Xinjiang. We hope the Chinese government will heed the message of this statement and end the abuses, including in Xinjiang, Hong Kong.

Execution of Lisa Montgomery Delayed—the Only Woman on Death Row

A federal judge on Thursday stayed the execution of Lisa Montgomery, potentially thwarting the government’s plans, announced in October, to put her to death in December.

Lisa Montgomery, a victim of severe child and sexual abuse with a history of mental instability, is the only woman on federal death row. The accelerated timeline of Montgomery’s case, and the Justice Department’s determination to proceed despite an election loss and her lawyers’ incapacity due to COVID-19, is an example of the dangerous consequences of its misplaced priorities.

As part of its renewed commitment to federal executions and a broader campaign to bolster its “law and order” credentials, the Justice Department, without notice to her attorneys and in the midst of a pandemic, announced in October that Montgomery’s execution would take place Dec. 8. Defense attorneys, taken by surprise at the expedited process, scrambled to respond and contracted COVID-19 after visiting Montgomery. 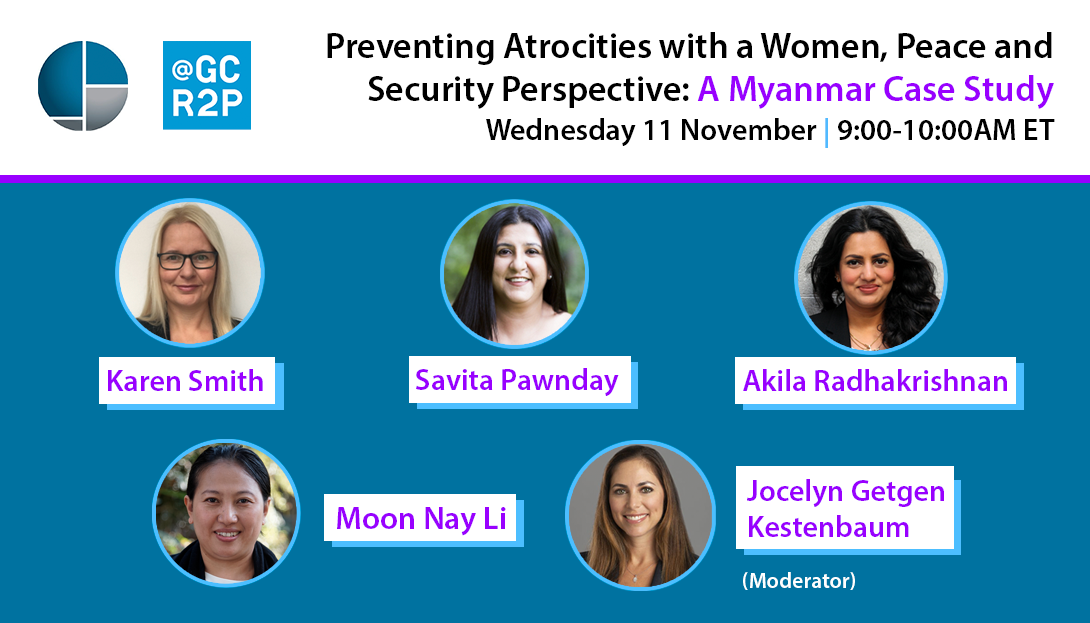 On the occasion of the 15th anniversary of the adoption of the Responsibility to Protect (R2P), as well as the 20th anniversary of UN Security Council Resolution 1325 on Women, Peace and Security, the UN Secretary-General’s annual report on R2P analyzed where issues related to gender and R2P overlap, from identifying risk factors for atrocity crimes to the prevention and response to such crimes.

As highlighted in the report, gender permeates genocide, war crimes, crimes against humanity and ethnic cleansing in many ways. The case of Myanmar highlights the value of closely examining the gendered dimensions of a particular situation. As this year’s R2P report reflects, the international community must do more to ensure a holistic, consistent, and gender-inclusive approach to atrocity prevention and response.

This webinar was co-hosted by the Global Centre for the Responsibility to Protect and the Global Justice Center and featured remarks from: