[NEW YORK, NY] - This week, the Trump Administration released the United States government’s latest strategy on women, peace and security (“WPS”).  While it contains lofty goals to advance women’s equality and political participation, these objectives are directly undermined by current US policies.

“The Trump Administration’s stated commitment to advancing women’s equality through the WPS strategy is absurd,” says Global Justice Center President Akila Radhakrishnan. “In fact, this administration is actively harming women and girls around the world by expanding the Global Gag Rule, blocking language on access to life-saving healthcare services for war rape victims at the UN Security Council, and impeding international efforts at accountability for gender-based violence through its threats against the International Criminal Court. Until these policies, and others, change, this WPS strategy is not even worth the paper it’s printed on.”

Especially concerning is regressive language indicating that the strategy will be guided by “the United States Government’s interpretation of the laws of armed conflict and International Human Rights Law.” The caveat perpetuates the Administration’s dangerous pattern of limiting the scope and interpretation of international laws. This worrying trend is evident in recent funding cuts to the Organization of American States⁠—due to the Inter-American Commission on Human Rights’ work on sexual and reproductive rights⁠—and the newly established State Department Commission on Unalienable Rights.

“States do not have unfettered discretion to determine the interpretation and scope of international law, largely because state practices often conflict with the standards imposed by such laws,” says Global Justice Center Deputy Legal Director Grant Shubin. “The Bush Administration violated international law on the use of torture, regardless of the long memos they produced attempting to justify practices like waterboarding as compliant with the laws of war.”

Ultimately, the impact of the Trump Administration’s women, peace and security strategy will depend not on its language but on whether the Administration meaningfully carries forward its purported commitment to gender equality, which will require a reversal of its policies and postures in multi-lateral fora.

The WPS agenda originated in Security Council Resolution 1325 (2000), where the Council recognized the disproportionate and unique impact of conflict on women and girls, and called for the integration of a gender perspective into peace and security efforts. The Obama Administration released the first US National Action Plan on women, peace and security in 2011, which was updated in 2016. The Trump Administration’s strategy follows the adoption of the Women, Peace and Security Act of 2017 by Congress, which specifically called for the creation of such a strategy. 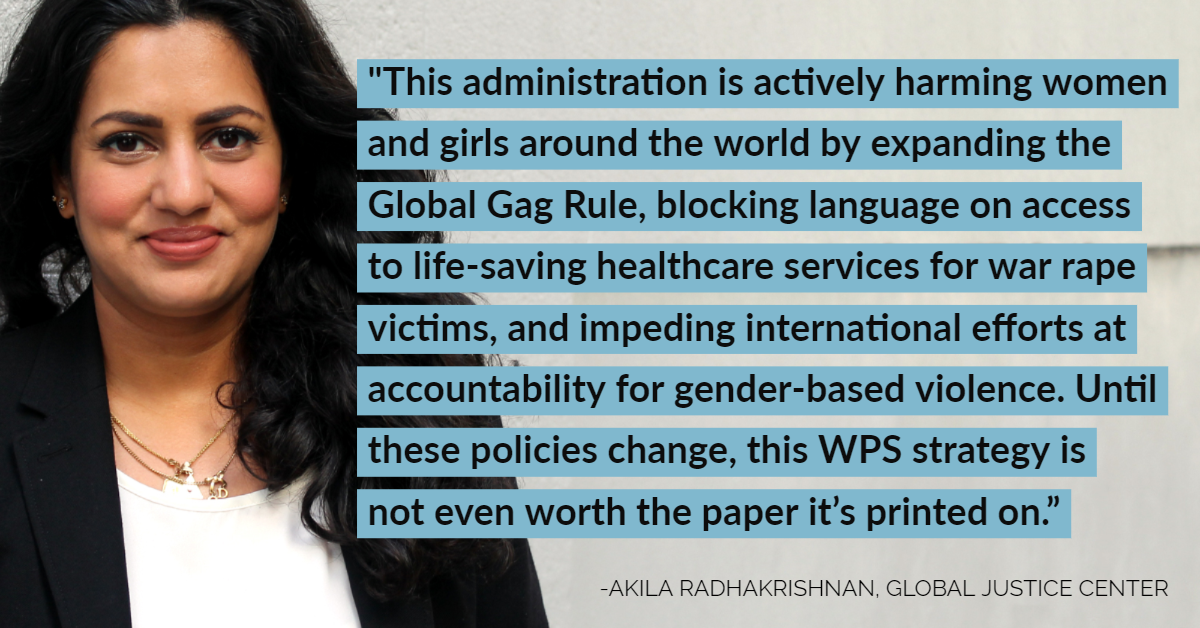