For Rescued Girls in Nigeria, it is More Urgent Than Ever for Obama to Overturn the Helms Amendment 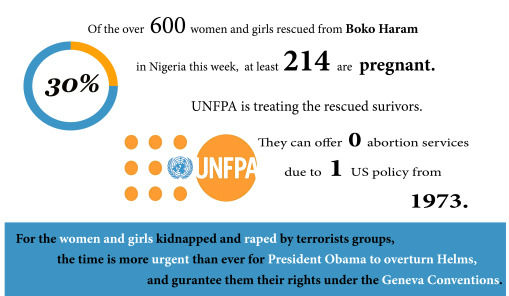 The Nigerian military has continued to advance, recovering many of the women and girls captured by Boko Haram. It is thought that Boko Haram originally kidnapped over 2,000 women and girls. This week, the military is said to have rescued several hundred, most recently 234 from the Sambisa forest. There are reports that the military has secured all of the Boko Haram strongholds, though it must be noted that the media has often exaggerated their successes. It is unclear whether the Chibok girls are among the rescued women. Grievously, it is thought that the school girls may have already been killed.

Hundreds of women and girls have been forcibly impregnated by Boko Haram. Unofficially, 214 of the recently rescued girls have been reported pregnant after facing horrific circumstances of sexual slavery and violence. Organizations like the UNFPA are working as best they can to provide for the women, with a spokesperson saying, “We look after them and ensure they get antenatal care and that they deliver properly and that they even get cesarean section when necessary.”  While UNFPA are doing good work helping these pregnant women and girls, they are hamstrung, by a decades old US policy, from providing the full range of medical services these women and girls require.

Women and girls who are raped in areas of conflict suffer from extensive physical and psychological injuries, making pregnancy and delivery dangerous. Several studies have found that pregnancy from rape in wartime compounds the physical, psychological and socials consequences of the survivors. While experts have acknowledged that pregnancy from rape can exacerbate the consequences of the rape, little has been done to actually address and resolve this problem. The vast majority of women who become pregnant from rape in conflict lack access to safe abortion services. These women could resort to non-sterile or non-medical methods, which can lead to scarring, infection, sterilization, or death.

The Geneva Conventions guarantees that war victims receive all the medical care required by their condition, for women and girls raped in armed conflict, that medical care includes the option of abortion.  In 1973, Senator Jesse Helms passed the Helms Amendment, which bans the sending of any US foreign aid money to any organization that performs or even discusses abortion services.  Four decades later, this misguided amendment is still in place and having very real consequences for the aid organizations providing services to the brave women and girls rescued in Nigeria.

GJC president Janet Benshoof says, “war rape victims are honorable heroines and victims of war crimes and they should be protected, honored, and respected.” For women and girls kidnapped and forcibly impregnated by terrorist groups, it is now more urgent than ever for President Obama to overturn the Helms Amendment, so that these survivors can have access to the full medical care they desperately need.