Today, during the Universal Periodic Review of United States, several member states of the UN Human Rights Council made statements condemning the anti-abortion restrictions that the US places on foreign aid, such as the Helms Amendment.

The UN Human Rights Council is responsible for monitoring the human rights records of the member states; every four years each country is reviewed and presented with recommendations on how to comply with their human rights duties.

The effects of Helms are can be seen in conflict zones around the world, most recently with the rescue of 214 pregnant Nigerian women from Boko Haram. The issue of comprehensive medical care has gained traction in recent months. As a result, today the Netherlands, United Kingdom, Norway, Belgium and France orally recommended that the United States work to ensure access to safe abortions around the world and limit the negative impact of the Helms Amendment. 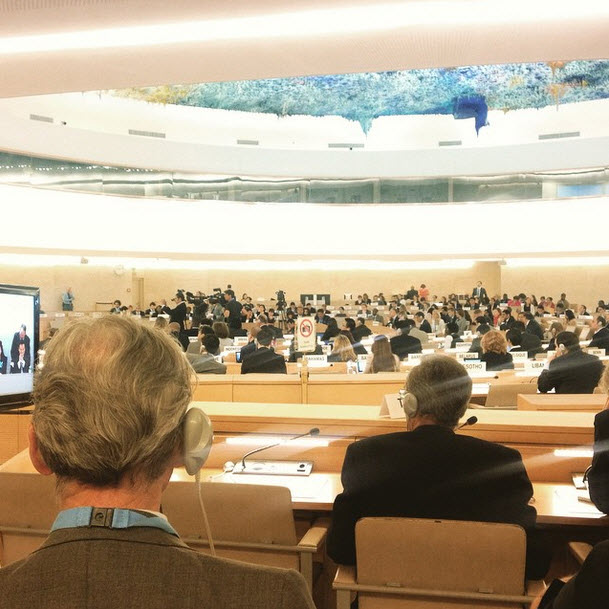 War rape is an illegal tactic of war, constituting torture or genocide, and denial of medical care allows the perpetuation of those crimes. The constraints of the Helms Amendment deny women and children access to safe abortions, and restrict aid agencies from even providing information about abortion services.

In September 2014, the Global Justice Center submitted a report to the UPR, highlighting the ways in which constraints against women’s reproductive rights are incompatible with the Convention against Torture and the International Covenant on Civil and Political Rights. In April 2015, GJC traveled throughout Europe advocating for countries to use the UPR process to question the current anti-abortion restrictions the US imposes.

In addition to the five oral questions, written recommendations were also submitted, requiring a response and justification, should the United States continue to uphold the Helms Amendment. The US government has three months to formulate a response. It is clear that the Obama Administration has a responsibility and urgent duty to remedy these violations.