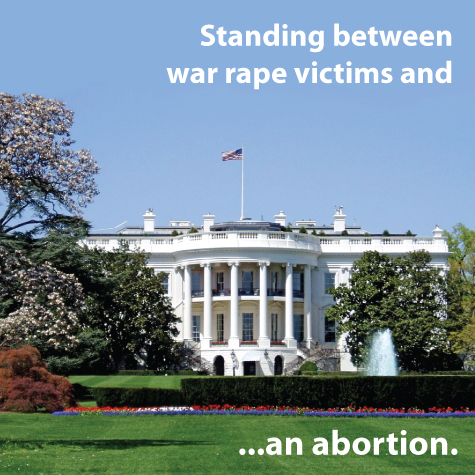 Today, more than 50 human rights groups from over 22 different countries took action on behalf of women and girls raped in conflict by sending a letter to President Obama pressuring him to issue an executive order that would lift the Helms abortion ban. Among the organizations that have signed the letter are the Global Justice Center, Amnesty International, the Religious Coalition for Reproductive Choice, Human Rights Watch, and the World Organization Against Torture. Groups have also signed onto the letter from conflict countries directly impacted by the abortion ban, including the West African Bar Association, the Iraq Women’s Network, the Syrian women’s League, and the Nigerian Medical Women’s Association. This letter is a testament to the pressure that is mounting on the United States to affirm the rights of female war rape victims as mandated under the Geneva Conventions.

The 1973 Helms Amendment is a huge obstacle in giving women and girls who have been victims of sexual violence the medical care that they need. These war rape victims are being denied lifesaving medical care, as the Helms Amendment prohibits U.S. foreign aid from being used to fund necessary abortions. Being the world’s largest donor of humanitarian aid, the U.S. is currently imposing its abortion ban on the United Nations, non-governmental organizations, and the countries of conflict themselves.

With the systemic rape and forced impregnation of women and girls by extremist groups such as ISIL and Boko Haram, it is vital that the U.S. overturn its abortion ban. The denial of abortions, especially in these circumstances, violates the rights of women and girls in conflict as mandated under the Geneva Conventions. These women and girls have the right to non-discriminatory medical care and freedom from torture.

The U.S. must respond to the UPR’s recommendations regarding the Helms amendment by this September. The Global Justice Center urges President Obama to execute an executive order to lift the abortion ban tied to U.S. foreign aid for, at a minimum, women and girls whose lives are endangered or who have suffered through rape and/or incest. Furthermore, the Global Justice Center encourages the President to affirm U.S. support for non-discriminatory medical care for women and girls around the world.

The clock is ticking. President Obama has less than two months left to respond to the UPR recommendations. The Global Justice Center urges the President to overturn the ban so that U.S. aid will serve its purpose, lives will be saved, and suffering will be alleviated.