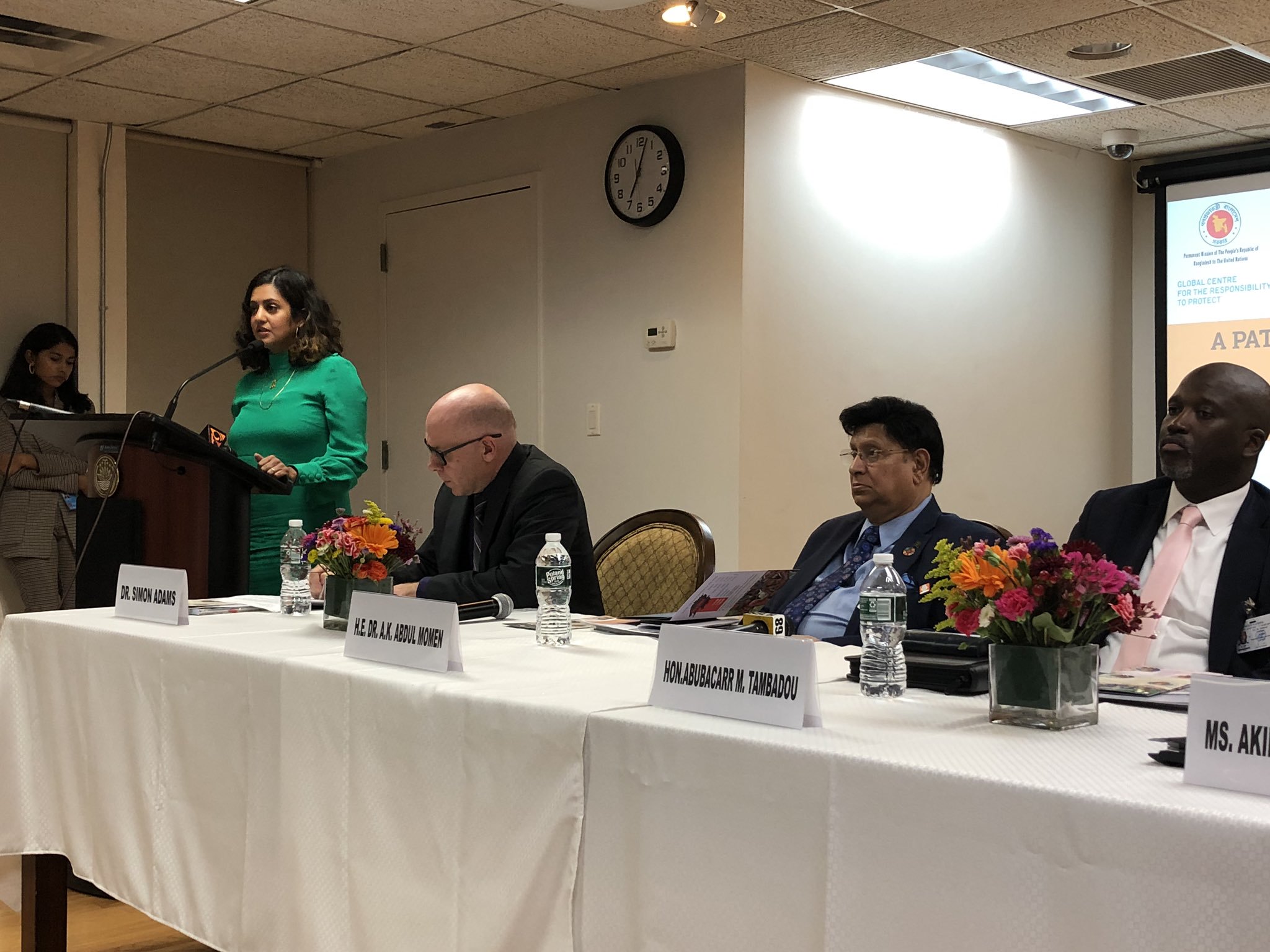 Thank you Simon. And thank you Minister Momen, Minister Tambadou for your leadership. It’s an honor to participate in this event with you both. As Simon mentioned, I am the President of the Global Justice Center, an international human rights organization dedicated to advancing gender equality through the rule of law. We combine legal analysis with strategic advocacy to ensure equal protection of the law for women and girls.

My organization has worked in Burma since 2005, largely on issues of justice and accountability, including for military-perpetrated sexual violence against ethnic women. As a result, we are all too familiar with the place we find ourselves in today: seeking to find ways to end to conflict and restore peace, break the cycle of impunity for horrific crimes perpetrated by the military against an ethnic minority, and a find path forward to true democratic transition in Burma.

And it’s this cyclical pattern of human rights abuses that informs my remarks today. Because if we are to truly find sustainable solutions to this crisis, our efforts, including around justice and accountability, must seek not only to address the immediate issues at hand, but also the structures and policies that allow the Burmese government and military to engage in systematic persecution and rampant human rights violations without consequences. And because my time is brief, I am going to focus on three key issues related to justice and accountability.

First, there must be a robust gender perspective at the heart of these efforts. Gender has consistently played a central role in the design and commission of the atrocities committed by the Tatmadaw against ethnic groups in Burma.

The military has long used rape as a weapon of war and oppression in its conflicts with ethnic groups, and in the clearance operations in Rakhine state, Rohingya women and girls were targeted for particularly brutal manners of killing, rape and sexual violence, and torture. Rape and sexual violence were widespread, pervasive, and often conducted in public. Many women reported being gang-raped, some by as many as eight perpetrators. 80% of the rapes documented by the FFM were gang rapes. These rapes were accompanied by other acts of violence, humiliation, and cruelty.

However,  gendered crimes and consequences were not limited to acts of sexual violence and rape. For example, Rohingya women and girls were often murdered by being burned alive or butchered with knives used for slaughtering animals—methods of killing that mirror the destruction of objects and property, demonstrating the Security Forces’ misogyny and deeply gendered conceptions of power.

It is precisely these acts that led the Myanmar FFM to conclude that sexual and gender-based violence was a hallmark of the Tatmadaw’s operations against the Rohingya, and demonstrates the military’s genocidal intent. There can be no true justice for the genocide of the Rohingya if acts of sexual and gender-based violence are not at the center of all accountability proceedings.

Second, justice and accountability are essential preconditions for resolution of the Rohingya crisis. Changing the Burmese government’s behavior to ensure the safe return of the Rohingya, dismantle the discriminatory laws and policies that justify and permit their persecution, and break the culture of impunity that pervades the country will require a multifaceted and concerted approach, engaging multiple forms of accountability, both of individuals and the state.

Looking first at individual criminal accountability, as those of us working on Burma have known for years, and as the FFM has emphasized, without significant structural reform, including to the Constitution, domestic accountability is not possible. This means that the international community must step up to enable processes that will hold criminally accountable those who--whether civilian or military--planned, participated in, or sanctioned crimes against the Rohingya.

The efforts of ICC Prosecutor Fatou Bensouda to open an investigation into the cross-border crimes that occurred between Burma and Bangladesh, and the establishment of the IIM are important steps in ensuring individual criminal accountability. However, both efforts are quite limited.

Under its limited (and untested) jurisdictional theory, a range of crimes that occurred to the Rohingya, including killings and acts of sexual violence that occurred fully on the territory of Burma, would be excluded from the ICC efforts. Furthermore, while the Prosecutor has not closed off the possibility of pursuing genocide charges, it is likely that the prosecutions will be limited to the crimes against humanity of deportation, other inhumane acts, and persecution.

The IIM on the other hand, charged with building case files, faces a more fundamental limitation - it needs courts to be available in order to actually render justice. At present, the ICC, which has its own processes and structures for case building, is the only available court. This means that the international community must do more to open up criminal accountability pathways. This could include a full referral to the ICC by the Security Council, the creation of an ad-hoc tribunal for Myanmar, and the opening of cases under the theory of universal jurisdiction by third states.

And while individual criminal accountability is important, it is not enough. The lack of true consequences from the international community to the state of Burma has allowed it to continue unabated in its discriminatory treatment of the Rohingya. Emboldened by the knowledge that political and financial interests continue to insulate them from meaningful consequences, Burmese authorities have variously denied any wrongdoing, ignored the problem, and failed to conduct genuine investigations, issue sanctions or hold perpetrators of these crimes to account. As the minister said, “business as usual.” This is why it is essential to also engage Burma’s responsibility as a state under international law. However, to date, little to no action has been taken by the international community on this avenue.

And here I would really like to commend The Gambia’s commitment to taking Burma to the International Court of Justice for violations of the Genocide Convention as the first truly meaningful step towards state accountability. The filing of a case with the ICJ will send a strong and powerful signal to the Burmese government that the international community will no longer tolerate its actions and seeks to hold it to account. In addition, a case at the ICJ through the issuance of provisional measures would have an immediate impact, including on the destruction of evidence by Myanmar and repatriation efforts. Furthermore, its merits could provide various forms of remedy and imperatives to punish, including much-needed legislative reform. Needless to say, gender must inform such proceedings. Other states must follow The Gambia’s lead in pursuing state accountability.

Finally, I want to conclude by urging us all to take a step back and reexamine what we mean by justice and for whom. The persecution of the Rohingya also comes against the backdrop of the long history of violence, systematic discrimination, and policies of exclusion and marginalization by Burma’s military against all of Burma’s ethnic minorities. Violence in Rakhine State has occurred alongside continued conflict between Burma’s military and various armed ethnic groups and escalating violence in Shan and Kachin States, and most recently, Karen state.

Despite the “transition” to a civilian government and democracy, no one in Burma, whether Rohingya or belonging to another ethnic minority, former political prisoners or others who were subject to human rights abuses by the military junta have seen any form of justice. As a result, a Burma where the Rohingya are able to safely return and live freely, is also a Burma where conflicts with all ethnic groups are ended, where all those who have suffered at the hands of the military have seen justice, and where the structures that prop up military domination and control, including the Constitution and discriminatory laws have been dismantled.

This means that a sustainable solution to the Rohingya requires addressing the broader context in which this crisis is situated. While there is no doubt that finding solutions to the dire humanitarian crisis faced by the Rohingya, including repatriation, must be a priority, it cannot be the singular focus of the international community. Accountability at the individual and particularly the state level must be a priority. Otherwise, we risk falling right back into the same trap we fell into over the last 10 years in believing that restoring democracy and Aung San Suu Kyi to power would solve all of the problems that faced Burma.